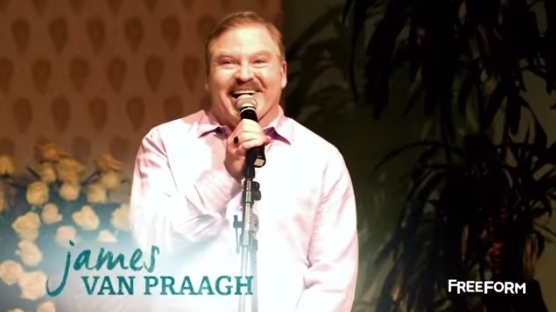 Last week on Monica the Medium, she made a positive impression on Tyler. This week, she hopes to impress her father. Will she succeed?

Monica lets her roommates know that her family is coming into town. The girls ask how her family feels about her being a medium. She says even though her father is supportive, he isn’t sure if it’s truly a gift or all in her head.

Monica has a Medium Margarita Monday with other spirit speakers in the community, including James Van Praagh. She tells them that her father has never seen her do a full reading. They agree that it’s difficult to read family because it’s harder for them to understand.

James invites Monica to be a part of an event he’s putting together in a couple of days. Monica thinks it would be a good chance for her father to see her at work.

Monica gives a reading to three sisters. Their mother and grandmother step through. Monica gets their names immediately. She also knows that their mother died from a blood disease that started in her legs. It’s amazing how intimately she gets into strangers’ lives with her gift. Monica knows that one daughter carries a prayer card from the funeral and what she’s going to name her unborn baby boy. The sisters leave impressed with Monica’s ability.

Monica is worried that her family won’t be supportive of her event with James. She invites her roommates who say they’ll be there. When Monica’s father and sisters arrive, she asks them if they want to go. Monica’s father asks if it’s possible to make a life out of being a medium. Monica assures him it is.

Monica and her family go paddle boarding. Her father has fun knocking the sisters off their boards. After coming in, Monica feels a spirit coming through for two women on the beach. Her family moves on while she gives the reading.

Monica gets the first girl’s father’s name correct and knows that he hung himself. She assures the girl that he’s in a good place and that he’s proud of her. Monica knows she’s recently engaged and says her father will be there to walk her down the aisle in spirit. It’s a beautiful moment.

The next girl has her grandmother come through who tells Monica that the girl had brain surgeries. She wants the girl to know that she’s pleased with everything she did for her while she was alive. Monica is always astonishing.

Monica is unsure how James works the room. He suggests they double-link at the event, which means connecting to one spirit at the same time.

Monica’s father is excited to see her at the event. She’s afraid to disappoint him.

Monica does a reading for a teenage girl and her mother at the event. She knows the mother lost half of her body weight after their loved one passed. She also reads for a woman who lost both her son and daughter. They saved their sister from dying in a car accident.

As the readings go on, Monica’s father and Kayla are both obviously awe-struck by the information she comes up with. Monica and James do their double-link and it goes well. Monica’s family is proud of how far she’s come.

See a promo for this episode here>><<